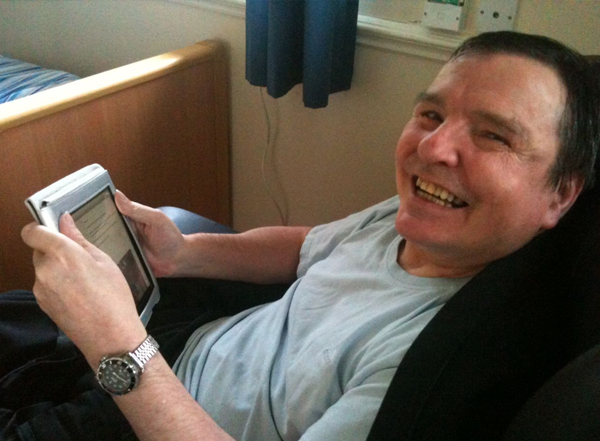 David suffered a traumatic brain injury in an assault some years ago.  He is dependent on others for support, uses a wheelchair and currently lives in a nursing home.

We were asked to meet him, to assess whether IT could add to his life, by providing a leisure activity as there was concern that he had a lack of meaningful activity in his life.

We soon discovered that David had lived a rich, interesting and varied life before he became disabled.  He is widely travelled, enjoys rock music (having once been a DJ) and loves to communicate with family and friends.  But he had problems with physical access to previous important interests  such as music, photographs, films, books and crosswords..

As David is unable to access a standard computer keyboard, we provided him with an iPad and taught him how to use it, initially to listen to music and to find photographs of the places he had visited.

Particularly by using it to play games, he learnt how to interact with the iPad using both his finger and a stylus and his accuracy has improved to the extent that he can use an iPhone as well.  He now emails his family in Australia and enjoys a social life which was not previously available to him.